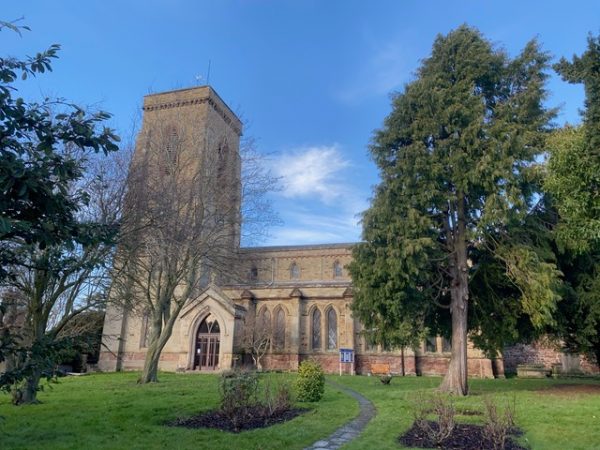 Before 1825 the medieval Church consisted of a chancel, nave, north and south aisles and a northern tower. The tower and probably the nave were built in the 12th century. The chancel was a fine example of Norman work and was originally separate from the main body of the church – see the 1824 drawing by D Parkes. Of the two aisles, that on the north was probably constructed in the earlier 13th century. It was under the same roof as the nave, while the south aisle, which probably had a separate roof, was added in the early 14th century.

Concern for the stability of the Church was felt as early as 1772 and, in 1810-11, local architects were called in to examine the fabric. Soon after this the tower collapsed and in 1825 what remained of the nave and aisles were taken down. Courses of stonework at ground level, however, are still in evidence on the exterior of the church. A substantial body of parishioners wished to take advantage of this by erecting three smaller churches in the parish, bringing to an end the anomalous system of serving the living. This was opposed by the rector of the first portion (Hamlet Harrison), who seems to have been responsible for the choice of the new nave and aisles, which were produced by John Turner of Whitchurch. The rector of the second portion (Charles Drury) favoured a plan for a cruciform church, with a central tower; put forward by Carline of Shrewsbury.

In the end a single new church was built at a cost of £5,000 most of which was raised by loans and mortgages and was opened in 1829. A brief had been issued for £3,500 in 1825 and £200 of the cost was provided by the Church Building Society, another £200 from the Michel Foundation of Queen’s College Oxford, as the present board on the north aisle wall shows. Turner died before the church’s completion and he was succeeded as architect by Samuel Smith of Madeley. It was built in the Early English Style and contained, like the former church, a nave with north and south aisles and a porch on the south wall, but the tower was set against the south-west end of the nave. The red sandstone of the former church was re-used in some parts of the fabric, which was elsewhere built of yellowish stone rubble with dressings of Grinshill stone. The chancel arch was rebuilt, but no other alterations were made to the fabric of the chancel. No significant Structural changes have been made to the church since.

In 1897 the body of the church was restored at a cost of £600 when the plaster was removed from the walls of the nave, colouring formerly applied to the arcades was stripped, and the brick window arches were encased in cement.
Minor alterations were made to the fabric of the chancel in 1904, at a cost of £600, when its roof was restored. Improvements to the west end of the nave were proposed at the same time but were not put into effect. The panelled wooden ceilings of the nave and aisles, however, appear to date from 1904.