The Bell Tower is of four stages, the belfry stage being exceptionally high, with pairs of corner buttresses added later for stability. The tower is over 30m (100’) high and was designed by John Turner in the ‘Gothic Revival’ style. It is often described as ‘handsome’ by many sources, and is an outstanding local landmark. The former church tower, on the north side of the church, measured 8.3m by 7.5m (27’2” by 24’5”), and collapsed in the 1820s. The Rector’s vestry is on the ground floor of the tower. On the first floor is the ringing room where ringers stand to pull the bell ropes, and above that is the clock room housing the clock mechanism. At the top, on the fourth floor with the louvered windows, is the belfry.

Bells have rung in St. George’s church Pontesbury for nearly 500 years. The first record is of “three great bells and a sanctus bell” in 1549.

Five of the present ring of six bells were cast in 1681 by Thomas Roberts, a Shrewsbury bell founder. They range in weight from 6cwt to the tenor, the heaviest, at 13cwt, and are tuned to ring the notes C#, B, A#, G# and F#. These five are the only known surviving ring of bells cast by Thomas Roberts.

The original medieval tower housing these bells was situated on the north side of the church. When the tower collapsed in the 1820s, destroying the nave but not the 14th century chancel, the bells were stored locally (conjecture has it that they were kept in the blacksmith’s workshop at the end of Chapel Street) before being re-hung in the present tower, rebuilt and dedicated in 1829. In 1869 a treble bell, 5cwt tuned to D# and made in the Whitechapel bell foundry, was added making the ring of six which are rung today.

The bells are hanging in the belfry behind the louvered windows at the top of the tower. Each hangs mouth downwards within a strong wooden frame and having a wheel at the side around which the bell rope is fixed. The bell ropes pass down the tower via holes in the floor and ceiling, through the clock room to the ringing room below.

Plans to add two more bells, augmenting the present ring to a ring of eight, proposed in autumn 1990 were not carried out.

The clock winding mechanism. There was a clock in the tower in 1788, and the present one, made in Whitchurch by JB Joyce, was inserted in 1858 with faces on the east, south and west sides.

This is a seven day clock, requiring the winder to climb 57 narrow steps to the clock room, before winding each of the heavy weights 56 revolutions, better exercise than a morning at the gym! The clock chimes the hours by means of a hammer striking the tenor bell (the hammer is seen on the left in the photo). The ringers pull this clock chiming mechanism away from the tenor bell before a ringing session takes place. 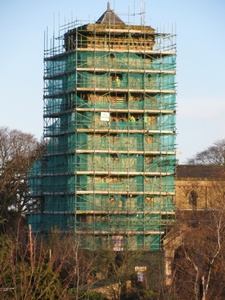 The bell tower at St. George’s, including the clock faces and the weather cock, was refurbished in 2010.

(Notes taken from the booklet ‘THE BELLS OF PONTESBURY A BRIEF HISTORY’ by J.S.Cowling 1991 and ‘A Guide to St.George’s church Pontesbury’ by Paul Lewis 1984).