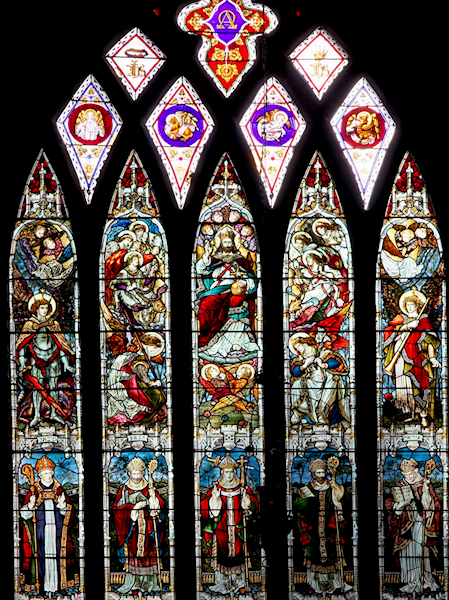 The Chancel was built in the 13th century and survived the collapse of the tower. It has remained substantially unaltered although it was restored in 1904. It is a spacious structure about 12.25m (50ft) long and 6.60m (21ft 6in) broad, dating from the Decorated Period.

The restoration is commemorated in the stained glass East window and the upper sections of the window depict the figures of Christ the King of Glory with the four Archangels; Michael, Raphael, Gabriel and Uriel.
The windows below were installed at the 1904 restoration and all show bishops. Their names are inscribed in Hebrew.

On the far left is Bishop Percival of Hereford, Bishop when the window was put in.

Next to this is St. Thomas de Cantilupe of Hereford, who died in 1282 and can be seen holding a replica of the medieval Pontesbury church, he was Bishop of Hereford when the medieval church was built.

The figure in the centre of the row is St. Thomas a’ Becket, Archbishop of Canterbury in the 12th century.

Pictures of this and the other windows can be seen on the Windows page.

The Rood Screen, with its inscription “Boldness to enter the holiest by the blood of Jesus” and the choir stalls on the north side were inserted at the restoration by S.J. Hawkes.

Brass plates carry these inscriptions:
To Him will I give my house without walls a memorial and a name better than sons and daughters”.
and:
Dedicated as a thank offering for the privilege of ministering for 50 years the Gospel of the Grace of God.
Romans XV 16. S. J. Hawkes.
Note, at the entrance to the chancel, the covered wooden heads on either side of the arch. Bishops’ heads face East and Kings’ West, depicting the significance of the early layout of the church: the chancel was for the clergy and the nave for the rest.

The pews on the south side were provided by Rev. W Harrison in the second half of the 19th century.
The early 17th century oak panelling around the walls, re-using sides to the box pews, was set up shortly before 1917.

A marble-topped table with a Classical reredos, installed shortly before 1788, was in use until 1886 when a new Communion altar and canopied marble reredos (a memorial to Mrs F. Barber Harrison) was installed by the rector of the first portion and her brothers, Bishop Lightfoot of Durham and the vicar of Cartnel and constructed by G. Street.

The altar was built by Walter Clement and carved by his wife, Dorothea, at their studio in Grove Lane. Their friend Fredrick Carter painted the three panels depicting Mary and the child Jesus in the centre with St. Peter holding the keys and St. Paul holding the sword of evangelism on either side. The backgrounds to the figures depict scenes from the local Shropshire hills showing the message of the Kingdom of God is as appropriate for Shropshire as for Galilee. Note the symbolic carving and inlay work of the altar.

Of special interest in the chancel is the aumbry where consecrated bread and wine were kept for taking to the sick. The door is dated 1652 and bears the initials HP, HH and WF. The door is a shouldered arch, so called because of its shape. It is to be found in castles both in Wales and Scotland dating from the reign of Edward I. This type of arch was employed by Master James of St. George, builder to the king.

The piscina opposite to the aumbry is of the same age as the chancel. It possesses a trefoil arch and a deep basin partly corbelled out. Here unused water from the Holy Communion Service was tipped and discarded.
Also in the south wall of the chancel is a priest’s doorway, which has a simple drop-arch.

The roof displays the common trussed rafter roof of seven cants with a cornice, on both sides carrying a dog-tooth ornament, denoting the beginning of the Decorated period before all Early English forms had disappeared.

There are also a number of monuments from the 10th century onwards. The two most interesting are against the north wall. One is a brass commemorating Owen Davis who died in 1596. The other commemorates Thomas Davies, merchant of London who left money to Christ’s Hospital, and who died in 1574. This has at the sides two female figures, one with two children and the other holding an anchor. At the bottom in the ‘predalla’ is a ship in full sail with a favourable wind blowing. The three carvings represent Faith, Hope, and Charity. However the monument is of a mid-18th century date and character, and was in fact erected by his grandson

Other monuments and windows include those to members of the Heighway and Harrison families, both of which were prominent in the church’s history.

The windows, starting at the North West depict scenes relating to the birth of Jesus at Bethlehem and ending with his baptism in the river Jordan. Note how the artist has drawn the water of the river. Note too the inscription to the window of the child Jesus in the carpenter’s shop ‘To one of Australia’s pioneers’. Many local people emigrated to the new world because of poor farming opportunities etc. here.

St George’s supports Eco-church and is working towards the bronze award. To find out more, please visit this  link: